skip to main | skip to sidebar

The National Capital Commission (NCC) and the Canadian Fallen Firefighters Foundation (CFFF) announced in September 2010 the winning concept for the construction of the Canadian Firefighters Memorial which will be erected on LeBreton Flats. The team, comprised of artist Douglas Coupland from Vancouver and Mary Tremain, partner at PLANT Architect Inc. from Toronto, won the Canada-wide competition with their concept “We Were There”.

“I wanted the monument to convey deep emotion and simple dignity,” said artist Douglas Coupland. “I want people to eat their lunch there, read, play with their kids — and each time they do so, a small part of themselves will reflect on firefighters and what they do every day when they go to work.”

The new memorial, intended as a national commemoration recognizing firefighters and firefighting from all parts of the country, is to be located on a prominent site owned by the National Capital Commission at LeBreton Flats near the Canadian War Museum. This highly visible site, on Wellington Street at the corner of Lett Street, was prepared in 2009 by the NCC in anticipation of this monument.

Construction will begin in the summer of 2011 and the monument will be unveiled in September 2012.

The CFFF is a registered charity and operates by fundraising. For information regarding the Canadian Firefighters Memorial, please visit: http://www.cfff.ca.

The Importance of Giving Awards and Recognition at Work 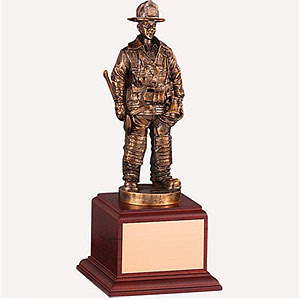 According to studies, employees work better if they are given incentives for good performance. People naturally love to be recognized so it is important that companies and organizations set up an awards giving system to keep its people inspired.

For all your Firefighter Awards needs visit our website at www.fireemporium.com.

Five designs for a monument dedicated to Canadian firefighters who died in the line of duty were displayed to the public for the first time on Thursday, with work from artists including Douglas Coupland, Ken Lum and Myfanwy Macleod.

The finalists in the design competition for the Canadian Firefighters Memorial were unveiled Thursday evening at the National Capital Commission in Ottawa.

Proposals for the monument included designs such as a giant firepole that acts as a lightning rod, protecting a tree and monument underneath; a wave of names of fallen firefighters that flow across like water; and an 11-meter-long, 4¼-metre-high wall of fire.

The monument, expected to be completed and unveiled in March 2012, will be located at LeBreton Flats, near the Canadian War Museum in Ottawa. The capital commission donated the land for the monument.

Canadian Fallen Firefighters Foundation, the charity working to build the monument, says over 1,000 firefighters have died in the line of duty in Canada since 1848.

Canadian Fallen Firefighters Foundations Website can be found at www.cfff.ca.

Recruitment numbers and government funding for volunteer fire departments are shrinking, the president of the Alberta Association of Firefighters says.

Alberta's volunteer fire departments receive $500,000 a year, which Cornforth said only covers basic training. He said many firefighters have to raise money to buy equipment. It would be time better spent training, he said, adding volunteers need more support.

"We're just borrowing these people from their families," Cornforth said. "We need to support them with proper training, proper equipment and proper recognition."

Chief Rene Blanleil has left the Kelowna Fire Department after 18 years of service. The City of Kelowna and Chief Blanleil mutually agreed this was a good time for a change.

"These decision are never easy", says Charlene Covington, Director of Human Resources. "We wish Rene all the best with his future endeavours.

Labels: Fire Fighters in the News

Julie Wade will become the first profession female firefighter in Nanaimo in 150 years. Wade has been a volunteer firefighter for 3 years and her transition into full time should be seamless.

Second major fire in Oliver BC in two days

Second Major Fire in Oliver BC in two days

At least 6 people are out of work in Oliver, BC, after the 2nd major in the southern Okanagan town in 2 days.

Fire Chief Dave Janzen says the fire was so fierce the building "imploded" in the heat.

He says crews will have to wait until the rubble cools before trying to investigate the cause.

Janzen says the fire does not appear suspicious.

The nearly 100 year old Mesa Hotel in downtown Oliver burned to the ground early Sunday morning, but no one was hurt. 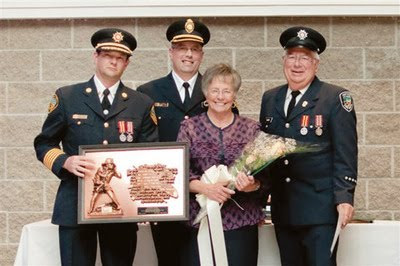 It was fitting that a call to respond to a fire came in the middle of an evening meant to honour the 132 active volunteer firefighters which make up the Fort Erie Fire Department.

As it turned out, the reported fire at a home on Ott Road was minor and was out by the time firefighters arrived on the scene. It was, however, a perfect demonstration of what the Fort Erie Fire Department is all about.

As a department driven by volunteers, firefighters have missed their fair share of family gatherings, anniversaries and dinners.

“It’s a good department because of the guys,” Deputy Chief Keith German said of the town’s firefighters.

“The guys driving the fire truck are doing all the work.”

It’s that dedication to the job that impresses German and the whole motivation behind the annual recognition night, held April 24 at the Leisureplex Banquet Hall. Awards were handed out to volunteers to recognize years of service ranging from five years right through 42 years.

German was humbled when he was honoured with a trio of service awards, provincial recognition for 25 and 30 years of service and federal honours for 30 years.

The real honours should go to the volunteers, German said. “For them to get to 20 to 30 years of service is phenomenal,” he said.

Time was also set aside at the awards night to remember Chester Wells, former Station 2 chief who passed away in 2003 after a battle with cancer, which came about through hazards Wells faced on duty.
Mayor Doug Martin saluted the volunteers with a touch of humour.

“Four years ago, we were a new council, with an old chief, old and getting older,” Martin said with a nod and a wink to former chief Jim Douglas, who retired in 2009 after 33 years with the department. “Now, we’re an old council with a new chief.”

In a more serious vein, the mayor said the Town will work hard to ensure that its volunteer firefighters have “first class facilities.”

He also praised current chief Larry Coplen and all the volunteers.

“We say when you’re here, you’re in good hands,” Martin said. “That’s exactly what we are in in Fort Erie.”

Coplen, meanwhile, said it was the quality of people that make the department what it is.

“The material things are not all that’s important,” Coplen said. “It’s in the plaques on the trucks honouring 50 years of service. It’s in the photos of retired and deceased fire fighters on the walls at the fire stations.

It often chronicles generations of dedication.”

Need awards for your Fire Department? Visit us a www.fireemporium.com. We have a wide selection of awards in many different price ranges. 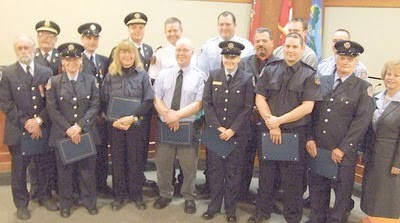 The awards, which come in the form of a certificate, signed by Chief Dave Carruthers and Mayor Ken Ferguson, were handed out at the start of Clearview Township council’s meeting at the municipal office in Stayner.


Proud Member of the Fire Chief's Association of BC
Link to website: http://www.fcabc.bc.ca

Proud Member of the BC Fire Training Officer's Association
Link to Website: http://www.bcftoa.com/

Firefighter Gifts
Kelowna, BC, Canada
The Fire Emporium is your online Firefighter destination store. We provide merchandise to celebrate the honourable and hardworking fire fighting professionals of North America. At The Fire Emporium we work with individuals, Fire Departments and other organizations that are in need of firefighter branded products geared towards gift giving and awards. We work with those clients who want to brand themselves more effectively to increase community awareness, and promote their fire departments. We specialize in Firefighter Awards, Firefighter Gifts & Novelties, Fire Department Promotional Items, Firefighter Branded Apparel, Firefighter Prints, Fire Prevention Week Materials within Canada, United States, USA, and North America.

Our vision at Fire Emporium is to provide quality Firefighter Branded Gifts and Promotional Products which will celebrate the honourable and hardworking fire fighting professionals of North America.

Our mission at The Fire Emporium is to work with those clients who want to market effectively, increase community awareness, and promote their fire departments.

We are focused on delivering quality Firefighter gifts, Fire fighter merchandise, Firefighter retirement gifts, service awards, and products that are delivered on time and meets the needs of our client in Canada United States, USA, and North America.

Keep up the good work Becky. You are awesome & very efficient at what you do. I look forward to re-ordering from you again in the near future.

I wanted to personally THANK YOU for your good service. Thanx for keeping me update as well. It is much appreciated.

I can’t wait to get my package.

Becky,
You guys are awesome!! Friday rolled around, and nothing came in the mail, but what shocked me, was that Canada Post knocked on my door on Sunday of all days, and delivered my plaque!

It was beautiful, and it was the day before I needed it, which meant that everything worked out wonderfully!

I thank you so much for working so hard to make everything turn out well!

I hope to order from you soon!
Shannon

WOW!! Now that was fast. YOU ARE AWESOME!
Can't wait to see it..

I will be calling you in the new year as I will be ordering the case as well...

(did I say THANK YOU)
Wendy McMillan

I look forward to dealing with your company in the future. I have also passed on your name to people who asked where we got the lovely plaques.

Been a pleasure, Troy 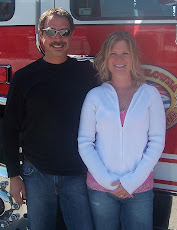 About Becky and Pat Harmata

The FIRE EMPORIUM of West Kelowna BC, is owned and operated by Becky and Pat Harmata, who live in West Kelowna, British Columbia.

Pat is a Captain with West Kelowna Fire/Rescue and has been in the fire service industry for almost 20 years.

The FIRE EMPORIUM is a firefighter family owned and operated company that has been providing products for the Fire Service Industry since 2004.